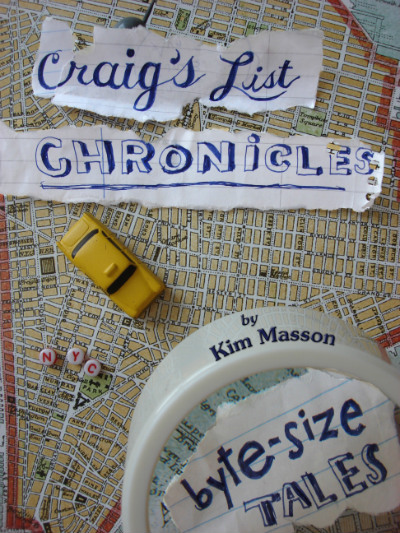 This month is about giving shout outs to creative New Yorker friends.

Intrigued by the plaintive, hopeful and often bizarre nature of the Missed Connections ads on Craigslist, Kim wrote a fictitious one just to see if anyone would respond. What ensued became the inspiration for her novel: loads of people emailed, claiming to have seen her faux character on the subway.

“I was shocked when people took my Missed Connection ad seriously,” says Kim. “Especially when it involved a zebra mesh tank top and a gal in a wheelchair wearing golden ballet slippers. It’s amazing what some people are willing to believe.”

After meeting her future husband from a job posting on Craigslist, Kim says,

“That’s when I knew I needed to write a book chronicling all of my strange Craigslist experiences. Some of my encounters were so weird and profound; I had to get them on the page. Craig’s List Chronicles: byte-size tales was born shortly afterwards.”

Told via emails, letters to Craig and classified postings, this keenly observant and funny novel follows the adventures of Kelly Brixi as she searches for love and meaning in the Big Apple right after Y2K. If you’re in the area, check out Kim’s reading and be prepared to laugh out loud.

The book is available now on Amazon.