Rules of the Flyer

Old school marketing for music shows and events is alive and well in the Mission District. Many flyers and posters are typically glossy and slick, but the hand-drawn ones have a low-fi, punk charm. Come upon a vertical surface— telephone poles, construction barriers, boarded-up storefronts—it’ll likely be covered with notices. During my political activist Berkeley days, groups of us would go “sniping.” We’d affix campaign posters and rally flyers everywhere with a staple gun. We had an efficient system: one would hold up the flyer the other would staple it with the gun. We’d arrange them in grids for maximum visual effect.

There was this unwritten rule that you’d never tear down other people’s stuff—that’d be uncool (unless they were Republican campaign posters—we rationalized they were doing it to us Dems). So we’d only cover up the ones that were out-of-date. Now that practice seems so quaint and idealistic given that these days competition for consumers’ attention is so fierce. But that’s not what’s happening as evidenced by the layers upon layers of flyers in these photos. It’s nice to know that the “rules of the flyer” still apply.

Penny rounded up a crew of skateboard rats and bike messengers and enlisted them to plaster every telephone pole and construction site barrier with Hayden Korr Band posters. 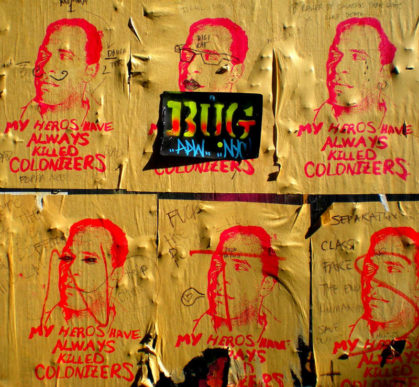 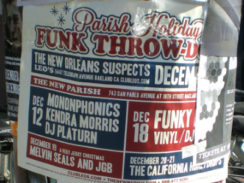 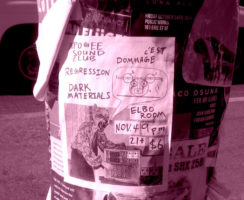 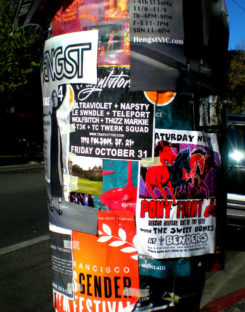