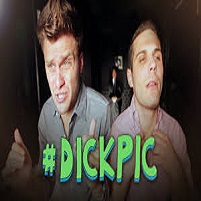 Dick Pics: Is Timing Everything?

Dick pics are back in the news again. This time Captain America has been busted for sending a photo of his penis to a sixteen-year-old girl. No, not the actor Chris Evans, who plays the superhero in the Marvel series. Although there are probably images of his photoshopped head attached to a torso—shlong out—circulating online this very second. This Captain America worked at the Universal Studios theme park in Florida. He had his photo taken with an underage girl. After she posted it on Instagram, he subsequently tracked her down, struck up an online “friendship,” and before you could say “Avengers Assemble,” he sent the dick pic along with explicit texts.

Let’s put aside the fact that a minor was involved. That’s its own brand of ew-inducing, inappropriateness as well as illegal. (The perp alleges he didn’t believe the girl when she revealed her age.) It’s his quote about why he sent the pictures, which raises questions about dick pics in general: “he did not know what he was thinking when he sent the photos of his penis” and he claimed he did not know “what he was expecting to receive from sending the photos.” Yeah right, dude, you knew what you were doing and what you wanted to get in return. And it wasn’t a bunch of texts filled with emojis of bunnies and hearts.

Dick pics are sent to arouse sexual interest. No mystery there. What I find curious is how they figure into the romantic trajectory (between adults, here). What’s the timing? When’s the best time to play that card to get the optimal result? A guy sends one too early, the woman could get turned off. However, one might be a titillating surprise after a date that included say, a steamy make-out session. Or do women care to see penis pictures on their electronic devices during any stage of the relationship? Scientific studies have shown that women do respond to visual sexual stimuli. The answers boil down to a woman’s personal preference and who’s dick is it anyway.

As this hilarious dick pic, selfie parody demonstrates, they are more about the sender than the receiver. No mystery there either.