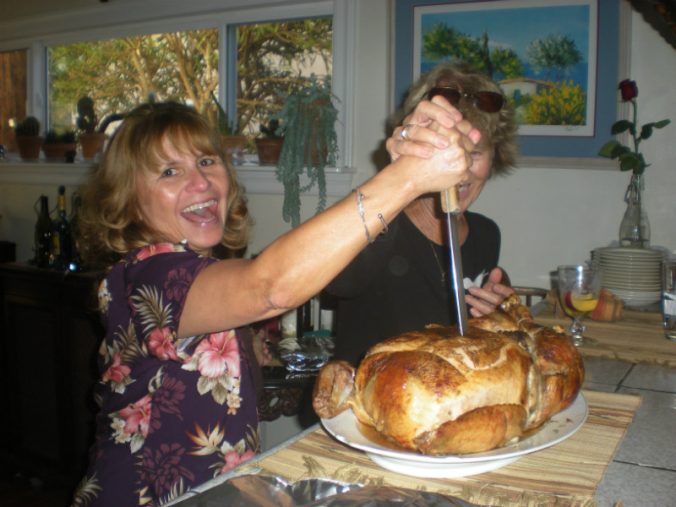 Barbara proves the turkey has been deboned.

I’m often asked how I learned to cook. This sweet story about my mother, written by my father Paulino, will give you some insights.

She was the teenage cook of the family, my best friend’s sister. The household consisted of a mother, brother and maid, and the father sailing the oceans of the world as a merchant marine.

I’d listen to tales of shopping in an open market for fresh vegetables, fish and meat. One incident sticks in my mind. She was haggling over the price of a milk fish (bangus) with the fishmonger, who wore rings and bracelets as she trimmed and scaled fish on the table. Rather than give in to the teenage girl’s price offer, that she might have thought insulting, the woman threw the fish into a bucket of discards.

She’d bring home a live chicken. The maid slaughtered it, cutting a vent in the neck and collecting the blood in a dish with vinegar. The fledgling chef cut the chicken for four recipes: soup, stew, adobo, and dinuguan, a delicacy cooked in coconut milk mixed with the chicken’s blood (dugo in Filipino).

That was over half-a-century ago in Manila, fifty-seven years to be exact. The chef and I began dating, and we got married shortly after her senior year at the Philippine Women’s University with a liberal arts degree. I’d started to teach with a master’s degree in education, major in English, from the University of Santo Tomas.

Our life took a turn when UCLA approved my application for a PhD program in English. We came to California with the first James Bond film. My wife had the discreet pleasure, years later, in seeing Sean Connery in a crowd at Wimbledon and touching the back of his jacket. I did meet a James Bond villain Christopher Lee at the B. Dalton bookstore in Westwood, and he kindly autographed my copy of One Hundred Years of Solitude.

My wife worked while I was at graduate school for four years. Her parents paid for the rental of an apartment off of Pico Blvd. Every morning she’d take the bus to downtown L.A., dropping off our daughter at a nursery school run by nuns. I’d take the bus going to Santa Monica, and transfer to another bus to go to the UCLA campus in Westwood.

My wife’s cooking repertory expanded from watching her aunt, who often invited us over on weekends, prepare American dishes. On weekdays her aunt cooked for the late Hubert Eaton in Beverly Hills, founder of Forest Lawn. We still have the Jewish Cookbook copyright 1941, that she gave us. Our cupboard has colored salts, white kosher, pink Himalayan, and black volcanic. She thinks the Peruvian salt is the best. It adds so much flavor.

My wife still cuts up chickens she buys at the supermarket, and stores the pieces in four freezer bags. The bones definitely go into soups. Two delectable recipes for the chicken breast stand out: chicken piccata, and baked with garlic and butter pushed into the meat with an injector.

For the dark meat, my wife would ask me, “How do you want this done: Southern fried chicken, Thai with lime juice and Sriracha, or Filipino adobo?” For dessert her piece de resistance is leche flan. Guests we invite for Thanksgiving Day dinner rave about her turkey. She splits the breast from the neck down, removes all the bones and the giblets, and stuffs the inside with her dressing of wild rice, pork, and sautéed vegetables. Then she sews the turkey back into its original shape and roasts it. Before serving the guests, she plunges a knife into the turkey to show that what they are about to eat is entirely boneless.

Is there truth to the proverb that the way to a man’s heart is through his stomach?