Love Match is now available in the Kindle Store. What are you waiting for? Go get it! 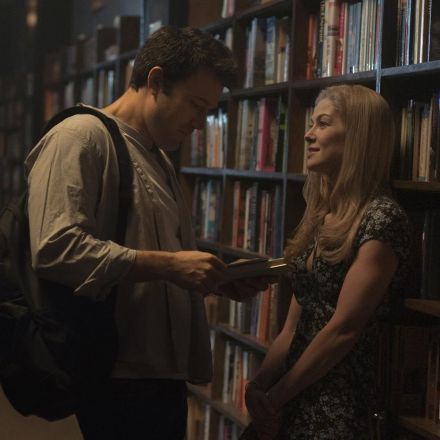 Nick and Amy during better times.

Gone Girl: 3 Things NOT To Do In A Relationship

Who didn’t stay up until 2 am reading Gone Girl, or run out opening weekend to see the movie adaptation? Aside from being an entertaining, lurid psychodrama, I found the story quite an instructive primer about “What NOT to do in a relationship.” So through the lens of Nick and Amy Dunne, follow these tips and you won’t end up in a loveless, desperate and fearing-for-your-life marriage or relationship.

1.      … pretend to be someone you are not. Amy’s brilliant “cool girl” diary entry spoke to many women, including me. She succinctly laid out how women will shift their personas to suit the tastes of the men they’re interested in. Amy willingly did just that when she met Nick. But her up-for-anything-size-2-shaved-pussy artifice could only last so long. Pretending can be exhausting and hard to maintain especially during stressful situations, e.g., unemployment. Under these conditions, the true self can emerge; and in Amy’s case, her psychopathic nature bloomed.

Pretense is also dishonest to the person you’re with and ultimately to yourself. All your choices are to please another, and when that happens, hello, resentment. Amy’s resentment—the sacrifices she believed she had made personally, logistically and financially—built up so much that she exploded.

2.      … turn to cheating. Notice how I said “turn to cheating?” Cheating in general causes damage and breaks trust in a relationship. During strife, it keeps you from addressing what’s not working. Nick and Amy were having issues. Rather than facing them, Nick skeeved out and took the lazy route. He had an affair. Sure, sleeping with his student made him feel invigorated and appreciated but it also distracted him. He wasn’t attuned to the shifts in his wife’s attitude. Granted, she was putting on a good face. Cheating only makes things worse and if discovered could lead to all sorts of foul consequences. In Nick and Amy’s case, his duplicity lead to character assassination, potential death penalty, media circus, and throat slashing.

3.      … expect your relationship to be like it was when you first met. Falling in love is truly a dreamy experience. There’s nothing like the thrill of discovering another has the same interests, totally gets you and makes you so amorous you can’t see straight. The effervescence lasts for about a year, maybe a little more if you’re lucky. Try as we might, real life intrudes. That’s what happened to Nick and Amy. Financial turmoil trounced all those warm fuzzy vibes. Amy desperately tried to maintain the facade that all was right in their romantic universe. A lot of good that did

In the movie, rather than communicating with Nick that she didn’t appreciate having her face ground into a mirror while he took her from behind, Amy pushed down her feelings. Then, all sorts of histrionics and perversity ensued. Ironically, the couple found themselves having to pretend to the media and the world that they were something they were not. So what does this mean for non-twisted types? Relationships evolve and if you keep lamenting for the early days, you might miss the many golden ones to come.

Who knew Gone Girl could be so instructive? If you learned of other relationship don’ts from Nick and Amy, let me know. 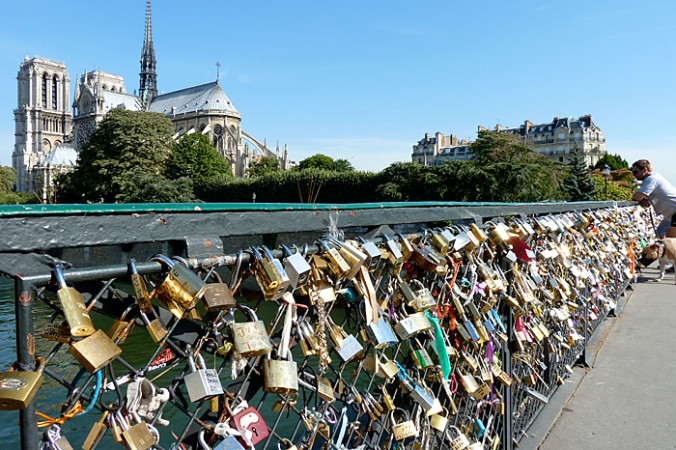 The City of Lights, considered one of the most romantic cities in the world, is putting the kibosh on romance. Quel damage! Actually, city officials are discouraging tourists from adding a “love lock” to the railing of the pedestrian bridge, Pont des Art, that connects the Louvre to the Saint Germain district.

The 700,000+ locks attached to the bridge every year are causing damage. A section of the bridge collapsed in June under the weight. No one was hurt but the incident has inspired preventive measures—plastic panels have been added to the railing—and a campaign NO LOVE LOCKS. Started by two American women living in Paris, their initiative aims to ban the practice because they believe it’s a gross tourist spectacle as well as it’s ruining their beloved city. I know American women love Paris, but these transplants are sure taking their devotion the extra mile.

Legend says the tradition came from a Serbian love story of unrequited love and heartbreak over 100 years ago. Villagers, inspired by the story, started engraving or writing their names on locks and affixing them to bridges to preserve and symbolize their love. Since year 2000 couples have come from all over the world to fulfill this romantic dream.

A friend told me on her last trip to Paris with her family, her husband surprised her with a lock specially engraved with their initials to affix to the bridge. “It was the most romantic thing he ever did, ” she said, her voice catching with emotion. Meanwhile, their teenage sons stood by watching their public display of affection—practically gagging.

Rather than locks, officials are encouraging lovers to post selfies of themselves, taken on the bridge or other hot spots around the city, via social media. Selfies?! Really? How can they be any substitute for such a romantic gesture as locking your love to a bridge? Paris can certainly come up with something better than that.

What do you think Paris should do instead to help symbolize your “locked love?” Leave me a comment!